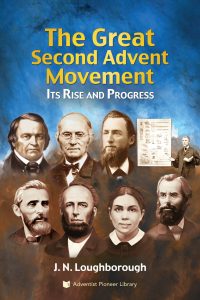 Order paperback (see table below for other translations)

John Norton Loughborough was an eyewitness of the founding of the SDA church, having traveled extensively with James and Ellen White, and having seen Ellen when she was in vision some 40 times. Brother Loughborough died in 1924, being the longest-lived pioneer.

Told to Tell What He Had Seen

Ellen White told him in his later life to tell what he had seen. The church leaders were instructed to free him to go among the churches recalling how the Lord had led in the early years. Brother Loughborough wrote a history of how the church began, calling it Rise and Progress of the Seventh-day Adventists. Ellen White stated in Letter 105, 1903, “Elder Loughborough’s book should receive attention. Our leading men should see what can be done for the circulation of this book.”

When the plates of the book burned in the Review fire, he revised and updated his eyewitness account, and renamed it The Great Second Advent Movement, printing it in 1905, just when Ellen White was calling for the pioneers’ stories to be told.

We retype set the 1905 edition, and reprinted it in December 1992, as the first pioneer book we brought back into print. It was a paperback edition of 573 pages with a new color cover painted by Seventh-day Adventist artist Nathan Green. A second printing was done in 2003.

Our Brazilian partners translated the book into Portuguese, and we co-published it in 2014.

We completely retype set the 1992 edition, with a new cover and size, in 2015, to match the Portuguese version done the year before, and completed a Spanish translation as well.

We are republishing select pioneer titles, as well as translating them into other languages. These are NOT facsimiles but are new layouts and covers of the digital versions we produced in the early phases of our project. Each of the titles in the table below are printed and are available through AMAZON– our print-on-demand source. 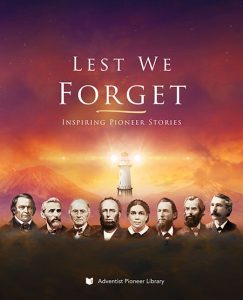 We published a quarterly periodical entitled Lest We Forget, to highlight the lives and contributions of the pioneers. Our theme is this statement: “We have nothing to fear for the future, except as we shall forget the way the Lord has led us, and His teaching in our past history.” (Life Sketches, p. 196; emphasis supplied). We have been told to sit the people down like Moses did and recount all the Lord has done in leading us out as a people. (Letter 105, 1903)

Volumes 1-10 are excellent, brief introductions to the key pioneer individuals (usually a total of 8 pages per issue). We attempt to tell an objective story, from the viewpoint of showing how God used the person, often in spite of any failings. We often reproduce a sample of their writings. Volume 11 begins a review of the first 40 issues.